I am Daniel. I was born and raised in the Ogden area. I have three older sisters and a younger brother. Growing up I had the opportunity to have summer vacations with my family. These were often road trips and usually included hiking, biking, or some sort of outdoor activity. 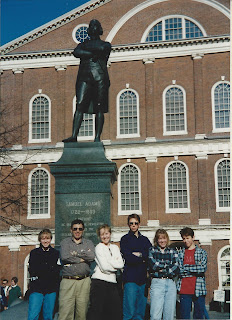 Growing up I had the privilege of living withing walking distance of both of my grandparents. I remember walking to Grandpa's house on Sunday afternoons for a visit. I realize now looking back that the walk was a way to channel my energy so I would be calmer at the grandparent's houses. I remember helping my grandfather, or father, with yard work or "fix it" jobs around the house. Often it was my job to "hold this". What I was holding was not important but that I was helping was.

I graduated from Bonneville High in 1999. I was then able to serve a two year mission for the Church of Jesus Christ of Latter Day Saints in the Tucson Arizona. The mission covered the southern parts of Arizona and New Mexico and El Paso Texas. I had the opportunity to serve in all three states.

After returning home I was able to attend and graduate from Weber State University with a degree in Economics and minoring in Math. This combination, I have been told, makes me a nerd. However, I feel that I am more of a geek; as I have social skills.

Shortly after graduation I met Ashley at the student ward I was attending when she finally decided to start attending. After dating for a short while we decided to get married. We were married in April of 2007 because this is when the tulips were in bloom. Tulips are Ashley's favorite flower.


Often, after being married for a little while, a couple has a surprise for everyone else. We did this as well when after just six short weeks we adopted a dog.  Her name is Lacy and she is one of the kindest, gentlest dogs I have ever met.  A year later we adopted a second dog named Winston. While Winston can often be sweet he has the terrier spirit and is often a spitfire.

While in the student ward Ashley and I were able to make friends that we will keep for the rest of our lives. After we all got married we continue to do activities together. Often this is in the form of dinners. From a full turkey dinner for a friends thanksgiving to Fondue each fall with the starting of a favorite TV program. We have enjoyed feeding and spending time with friends.

Since returning from my mission I have had the opportunity to work for Lifetime Products. Working for this company has given me many different opportunities. The most life changing has been the nineteen months Ashley and I were able to live in Xiamen, China.

While living in China I was able to make new friends and learn about different cultures. We made friends we hope to stay in contact with for the rest of our lives. And seeing a panda up close in person was amazing.

I am looking forward to having kids and being able to share in their experiences.